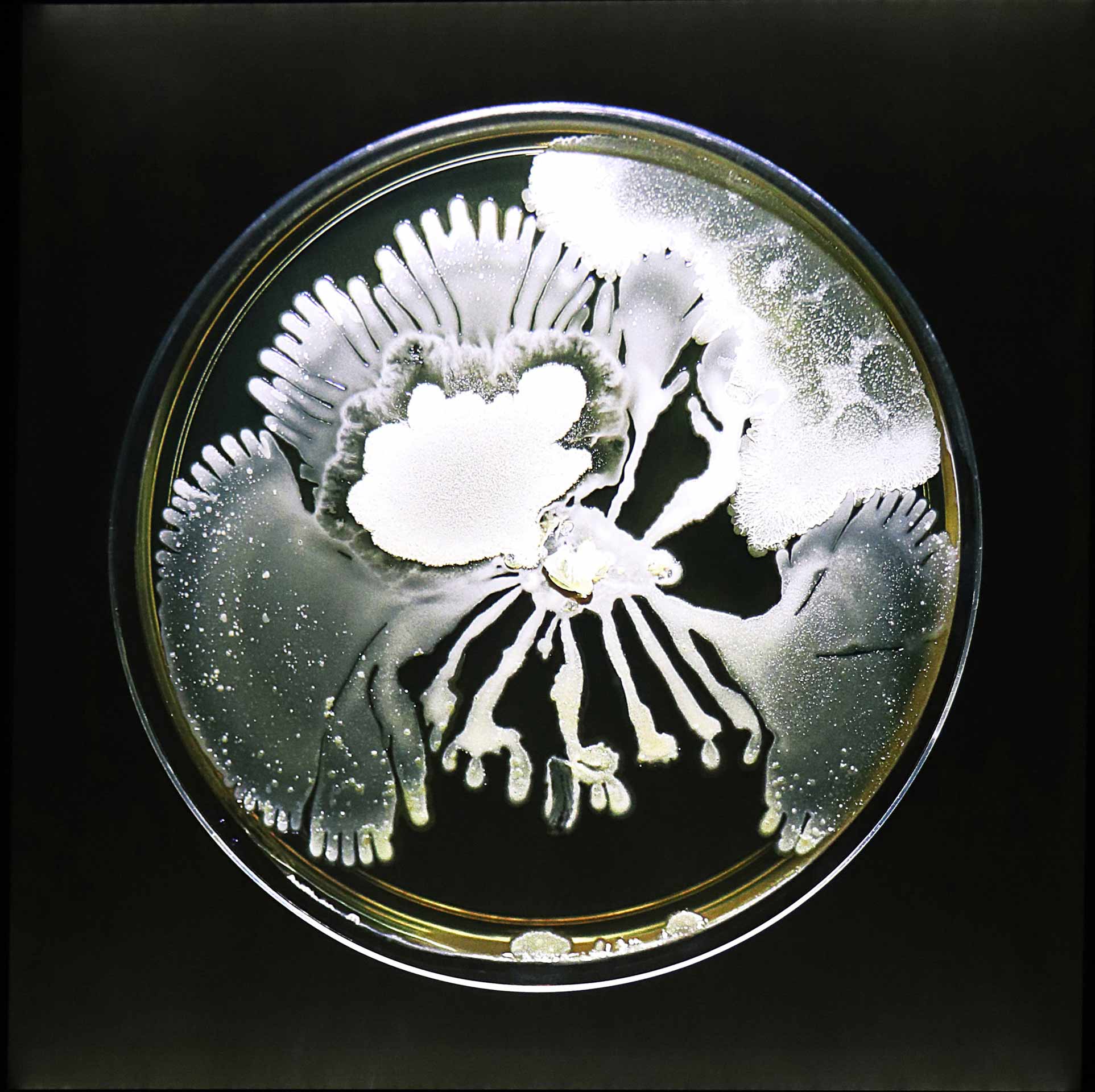 Extract from the catalogue essay by Nancy Adajania:

Even now, after so many years, if she were to close her eyes, she can see that gorgeous tree in the Sundarbans biosphere reserve.

“I came upon this magnificent mangrove tree with a sprawling network of aerial roots or pneumatophores spread across a vast area. I knew at once this was not just any tree. This was a conscious, intelligent system.”

Sonia Mehra Chawla (b. 1977) will show a selection of her works, made during the last seven years, at 1x1 Art Gallery, Dubai. These works zigzag across the mediums of photography, printmaking, painting and film. The exhibition title, ‘(Un)Containable Life’, makes deft use of the parenthesis: it deconstructs the extractivist modes of controlling human and non-human lives in the age of the ‘Capitalocene’ (in Jason Moore’s phrase). Framed in the form of a mini-retrospective, this exhibition is a prayer against the relentless destruction of the planet. It offers us a substantial account of the artist’s journey so far.

As we join Sonia on her expeditions across the mangrove forests, wetlands and salt pans of India, and a tidal island in Scotland, we sense her empathy with ecological ruins and indigenous communities, and her disquiet at the manner in which such communities have been marginalized from the surroundings that they have conserved for hundreds of years. I would argue that, in the last few years, we have witnessed an extraordinary transition in the artist’s practice from a focus on the modernist, singular art object functioning as a portrait of a botanical specimen or an interconnected ecology, to the embrace of a more collaborative, processual understanding of art as a means to transformative knowledge. For Sonia, art is now indissolubly wedded to an ethic, even a politics of multi-species co-existence. Indeed, her artistic research could itself be seen as a political act, in which she has conspired with oceanologists, microbiologists and climate-change scientists, as well as farmers and fisherfolk who speak from their deep reserves of traditional wisdom.

At the heart of Sonia’s practice, we experience her play with the poetics of scale and her transition from representation to participation. Take, for instance, her latest video, ‘The Non-Human Touch’ (2020). Here, the artist refuses to convey an easy aesthetic of the sublime by approaching the uninhabited beaches of Cramond Island from a remote distance. Instead, she gathers soil samples from the island and studies them in Petri dishes and Winogradsky columns in a laboratory – she disrupts the aesthetic construct of representing an external and awe-inspiring reality, replacing it with the messy engagement of being part of what is seen, what is being shown, what is larger than us yet within us, thus implicating herself viscerally in the crisis of the Capitalocene. shockingly callous and ultimately self-destructive disregard.

Suggestive of the fluid boundary between self and other, species and habitat, the title of Mehra Chawla’s exhibition alerts us to the need to subject our visions of anthropocentric, nature-depletive development, to critique. In bearing witness to an unprecedented moment in the history of the planet, she brings together a variety of impulses, ranging from microscopic details of bacterial and microbial cultures to documentary cinematic studies of marginalised groups whose eco-sensitive occupations have suffered as a result of the decline in their environment. Her thread through the labyrinth is woven together with the threads of other questors, other survivors, other celebrants of resistance.’ (excerpts from text by Ranjit Hoskote, 2019)

What does it mean to invoke the ghosts and histories of lost or near-extinct species, forests and sensations? What is the relationship between macro structures and micro agencies? How do local histories contribute to global changes? What drives these changes? how do these contributions change over time? How and where does ‘scale’ matter? What does it mean to bear witness to violent erasures of spiritual and livelihood practices and the environment at large? What does it mean to ‘Care’ for our other-than-human kin? And finally, is it possible to imagine a reparative future for a damaged planet using decay as a starting point?

Drawing on transdisciplinary conversations about life on earth and the works of evolutionary theorist,  scientist and educator Lynn Margulis, animal physiologist and biochemist Prof. Margaret McFall-Ngai, and anthropologist Anna Lowenhaupt Tsing, the project explores and imagines a worldview of entangled histories, symbiotic relationships and contaminations, exploring creative tools for imaging collaborative survival in a more-than-human Anthropocene, and inspiring us to look at all life in novel, meaningful and exciting ways.

Sonia Mehra Chawla is an artist based in New Delhi/India. She received her BFA (2001) and MFA (2004) in Fine Arts from Delhi University’s College of Art in New Delhi/India. Chawla has an interdisciplinary practice as an artist, photographer and researcher. Chawla works at the intersections of art, science and technology and artistic practice explores notions of selfhood, nature, ecology, sustainability and conservation.

Sonia Mehra Chawla is a fellow of the Charles Wallace India Trust of the British Council, and was awarded a scholarship for a research project in the United Kingdom in 2015. Furthermore, she was an awardee and fellow of the Art+ Science International research and residency program of Khoj International Artists’ Association in New Delhi, supported by Wellcome Trust UK/DBT India Alliance (2017-18) Chawla was awarded an International fellowship in the area of Social Sciences by Akademie Schloss Solitude, Stuttgart, Germany for the Art, Science and Business program of the Akademie (2017-2021). She received a fellowship from Creative Scotland and Marine Scotland in 2018 for an art & science engagement project in Scotland, UK, supported by Edinburgh Printmakers, ASCUS Art & Science & Marine Laboratory of the Scottish Government in Aberdeen. (2018-2021).

Nancy Adajania is a Bombay-based cultural theorist and curator. She has curated a number of exhibitions including, the Mehlli Gobhai retrospective 'Don’t ask me about colour', National Gallery of Modern Art (NGMA), Bombay, 2020; the Sudhir Patwardhan retrospective 'Walking Through Soul City' NGMA, Bombay, 2019; 'Counter-Canon, Counter Culture: Alternative Histories of Indian Art', Serendipity Arts Festival, Goa, 2019 and Navjot’s retrospective 'The Earth’s Heart Torn Out', NGMA, Bombay, 2018. Adajania taught the curatorial practice course at the Salzburg International Summer Academy of Fine Arts (2013/2014). She was the juror for the Video/Film/New Media fellowship cycle of the Akademie Schloss Solitude (2015-2017).