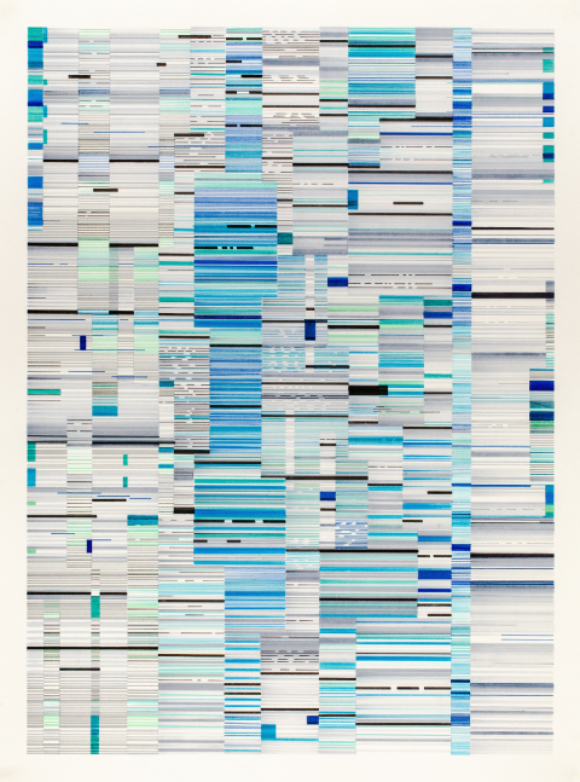 Menon is a New York-based multidisciplinary artist who creates inimitable drawings & paintings that focus on digital aesthetics. He has a rigorous and highly-layered practice built upon the meditative nature of repetitive mark making. Menon began his relatively more traditional explorations in 2014-15, after having completed his M.F.A at the Maryland Institute college of Art and have spent several years working in a professional and personal context in the digital medium.

How does human-machine interaction impact perception? This has been the key area of exploration in his interdisciplinary practice over the last decade. Signal-to-noise ratio is a measurement used in science and engineering that compares the level of the desired signal to the level of background noise. The term aesthetics of failure’ plays a crucial role in Visakh's process, alongside elements of chance and randomness. Hardware errors in graphic cards, ROM corruption in games, broken LCD displays etc., often lead to unexpected visuals that cannot be planned or controlled; this is the space he likes to frame his work in conceptually. The algorithmic aesthetics of these works push into focus both the functional (generative) and dysfunctional (glitch) nature of codes as a tool for expression.

The ‘Interference’ series of paintings depict geometric abstraction and colour field paintings, with a process transitioning from digital to traditional mediums of drawings and paintings, driven by the notion of repetitive mark-making as an act of meditation. These abstract paintings and drawings aim to create a visual space derived from algorithmic aesthetics with the repetitive lines creating optical and spatial shifts referencing screen space.
The ‘Signal’ series of ink and graphite abstract drawings explore concepts of structure and hierarchy as informed by the diagrammatic representation of command-and-control modules often seen in electronic systems, social networks, botnets, neural circuits, genome maps, etc. As the efficient flow of information has become essential for the exchange of ideas, social interactions and political discourse in our networked society, the unique visual and conceptual properties of the diagram referenced in these works aim to create an exploration of inter-connectivity and help ponder the multitude of systems that make our daily lives possible.