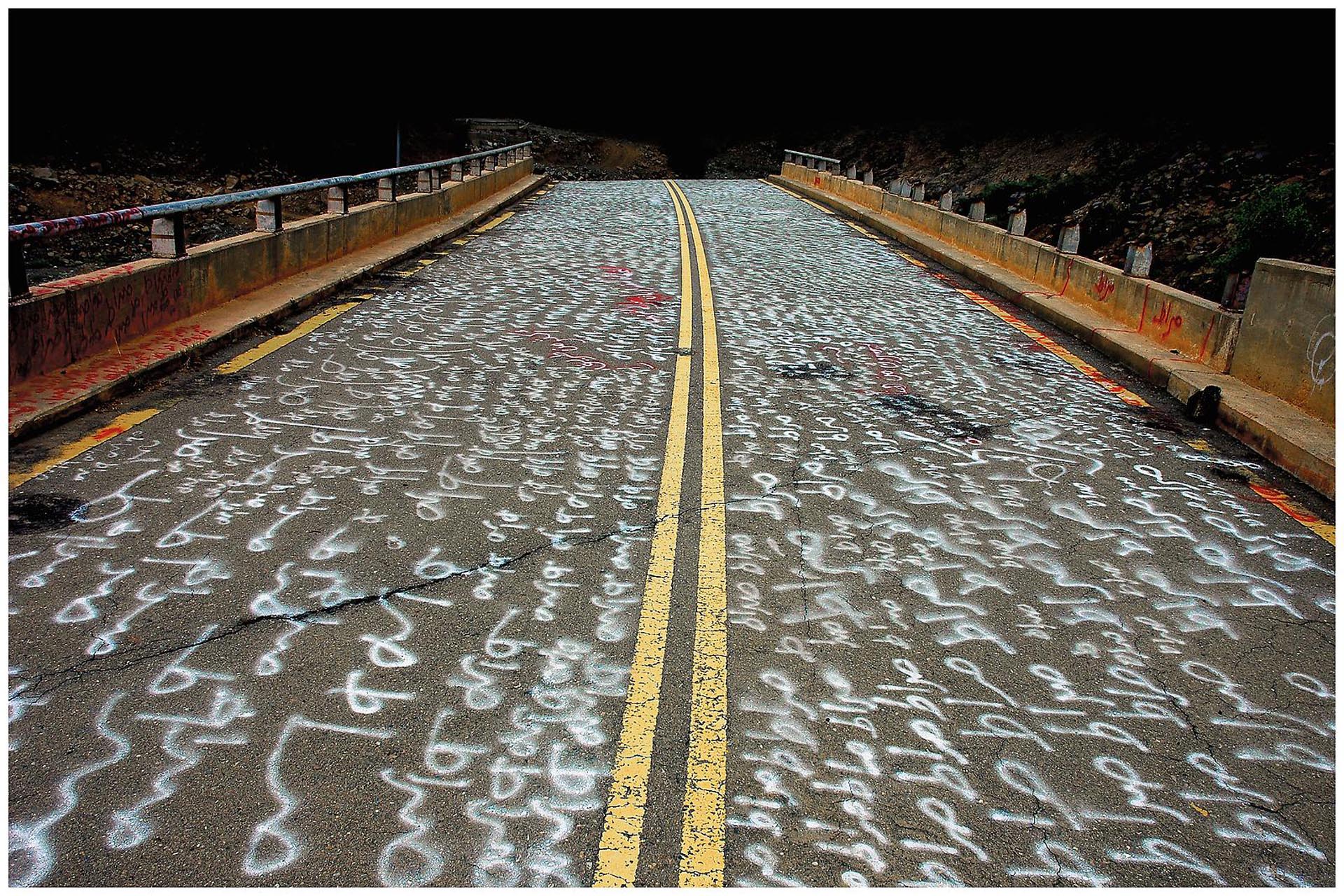 Abdulnasser Gharem is a conceptual artist who operates over a multitude of fields, challenging the perception of art in his native Saudi Arabia. His work comprises of photography, video, performance and sculpture, examining the nature of life in the modern day. In his performances he playfully uses the street as a canvas to construct a social critique. His performances have welcomed collaboration, involving the community within his projects. As a Lieutenant Colonel in the Saudi Army, themes of control and authority can be felt within this work, as well as a desire to preserve and respect the history upon which traditional art is built. Gharem therefore presents conceptual work that not only harks upon heritage but is politically and socially astute. Born in 1973, Gharem attended the King Abdulaziz Academy and the Leader Institute in Riyadh before studying at the Al-Meftaha Arts Village in Abha. Following his record-breaking sale at Christie’s in 2011, Gharem helped found ‘Edge of Arabia’ to help promote arts education and to give a platform to contemporary Saudi artists internationally.

Chittrovanu Mazumdar was born in Paris in 1956. Graduating top of his class from the Calcutta Government College of Art in 1981, his education in art began much earlier, at home, where his father, a celebrated figure in the Indian art movement, initiated him into a life which lives and breathes art. His multicultural upbringing in a family of artists and writers in Kolkata and Paris, and his own restlessly seeking temperament, have led to his developing an international vocabulary and grammar of art which unselfconsciously draws on any manner of aesthetic, literary, and socio-cultural sources and influences. Mazumdar’s knowledge of a diverse range of textures and materials comes through in his ample usage of sound, light, videos, photography, paint and other medium to create works that do not conform to normative standards of art. His perpetual desire to collate new ideas into the artistic space drives him to push the boundaries of his own mind and work. His range of references is vast, incorporating varied inputs from his own culturally rich upbringing in Kolkata and Paris and a vast range of eclectic reading in three languages. Mazumdar finds multi – disciplinary collaborations a source of excitement, and he is known to engage with professionals from various disciplines including theatre and publishing.

Cristiana de Marchi (born in Italy, lives and works in Beirut and Dubai) is an artist and a writer who explores (through performance, video, and installations of embroidered objects and tapestries) issues related to verbalization and translation, to the correspondence between physical and nominal dimensions. Cristiana de Marchi’s work is minimalist in its essence. During the past few years she has been intensively working on embroideries using a variety of easily accessible objects and materials, which we deal with on a daily basis including kitchen utensils, light home furnishings and aliments. Some of her themes are the use of languages in propaganda, the transition between ‘territories’ and contexts and the redefinition of memory and identity. She was artist in residence at the University of the Arts, Philadelphia, USA. Her work has been shown in India, Italy, Kuwait, Lebanon, Mexico, Spain, UK, UAE and USA.

Mithu Sen was born in 1971 in West Bengal. She obtained her Bachelor’s and Master’s degrees in painting from Kala Bhavan at Santiniketan. She later completed a postgraduate program at Glasgow School of Art on the Charles Wallace India Trust Award in 2000.  An artist and a Bengali poet, Mithu Sen’s oeuvre of visual art is a keen hybrid of self-reflection and playful expression, punctuated by a dark sense of humor. She nudges her spectators in playing a game of active voyeurism, in which she canvases eroticized images of herself and of others. She experiments with her gendered identity in a self-conscious post-feminist approach. As a speaker of a native Indian language Bengali, Sen creates works that challenge the notion of language as a natural means of communication, and attempt to transcend the politics of control and codes of propriety that dictate our perception of the world. Sen’s practice stems from a strong drawing background that has extended into an expressional vocabulary of her own, which encompasses multiple media forms like drawing, sculpture, sound, video films, and site specific installations. Moreover, these diverse materials are used as metaphors in her works, where the simple game of life in performance becomes a poetic evocation of human existence. The various recurring motifs in her works have a psychoanalytic reading to them that mobilize an exploration of the subconscious. The ease with which Sen negotiates the public and private realm, enables her works of deep-rooted Indian context to gain a universal significance. Her works satirizes various taboos associated with human existence and try to invert them by adding a dark humor to them.

Mohammed Kazem was born in Dubai, U.A.E. in 1969. He first studied fine art at Emirates Fine Art Society and went on to learn music, and attend national and international art workshops, as well as teaching painting at Dubai Art Atelier.

Kazem’s works have been selected for Biennials and Exhibitions around the world for over two decades, including Moscow, Holland, Singapore, Japan, Egypt, India, Germany, and Cuba. Says Kazem “My work is related to the global transformations that are occurring today in the social, political, and natural environment. Through my work I reflect on the multiple events around me and raise issues closely related to specific aspects that have affected my personal biography, such as the changes in the UAE or situations I have experienced through my travels internationally. I aim to produce works which are animated by a sense of harmony, by using photos, images, video, and available technologies, but I also use traditional and conventional practices like drawing and painting  when necessary to convey or support my concept. I am fascinated by collecting and documenting information about seemingly unimportant objects, traces of our present, within a particular environment, by photographing them and identifying and mapping their coordinates. I use GPS as a tool for drawing shapes, recording an item’s location, and/or provoking political issues by using this tool in various ways to create multiple dimensions of meaning.

Safwan Dahoul’s evocative canvases, all of which share the title Dream, examine some of the most intimate moments of the human experience: slumber, companionship, solitude and death. The soulful, dreamy human figures that populate his work are ‘substance matter’ for the artist, a tool through which he depicts and preserves his own biography. Dominated by black, white and muted tones, Dahoul’s canvases explore the relationship between the figure and its background, between the human being and space. His minimalist use of colour references his surroundings and is a response to the absence of colour now seen on the streets of Syria and the rest of the Middle East. Born in 1961 in Hama, Syria, Safwan Dahoul lives and works in Dubai.  Dahoul attended the Suheil Al Ahdab Center of Plastic Arts and the Faculty of Fine Arts in Damascus. In 1987 he received a scholarship to study abroad from the Ministry of Higher Education and relocated to Belgium, achieving his Doctorate from the Higher Institute of Plastic Arts in Mons in1997.

Shibu Natesan was born in 1966 in Vakkom, Kerala. He obtained a Bachelor’s in Fine Art in Painting from College of Fine Arts, Trivandrum, Kerala in 1987 and Master’s in Fine Art in Printmaking from Maharaja Sayajirao University of Baroda, in 1991. He later did a two-year residency at Rijksakademie Van Beeldende Kunsten, Amsterdam which was funded by the Netherlands government in 1997. The traditionalist in Netasan is seen through is strict use of oil on canvas. The starting point of his large-scale paintings is isolation which Netasan describes as his “permanent companionship”. The energy of his works relate to his isolation in all senses, political, social and personal stemming from living in two countries, India and England, a situation that emphasizes the anonymity, intimacy and distance in his recent works. In his paintings the artist employs media images with natural vistas that often include wild animals. Employing unexpected combinations and sources, Natesan confronts the viewer with symbols that are vaguely familiar on their own, yet in juxtaposition to each other evade direct connections to the real world. Familiar images are combined with bold, colorful palettes to enhance Natesan’s unique, collage-like compilations – the result is a mixture of hyper-realism and fantasy.

Following the outbreak of violence in Syria, Tammam Azzam has used his artistic practice to reflect on the worsening situation. The artist has been working increasingly with digital media and has often referenced street art, recognising both of these mediums as powerful and direct tools for protest, which are also difficult to suppress. In early 2013, Azzam made headlines world wide when his work Freedom Graffiti went viral on social media. He enlisted one of the most iconic kisses in art – Gustav Klimt’s The Kiss - to protest his country's suffering, superimposing this image of love over the walls of a war-torn building in Damascus. The work was one of a series, Syrian Museum, in which he placed imagery taken from masterpieces of Western art history into photographs of scenes of devastation across Syria, to both highlight the destruction of Syria’s cultural heritage and to juxtapose some of the greatest achievements of humanity with the pain it is also capable of inflicting. Born in Damascus in 1980, Azzam lives and works in Dubai.