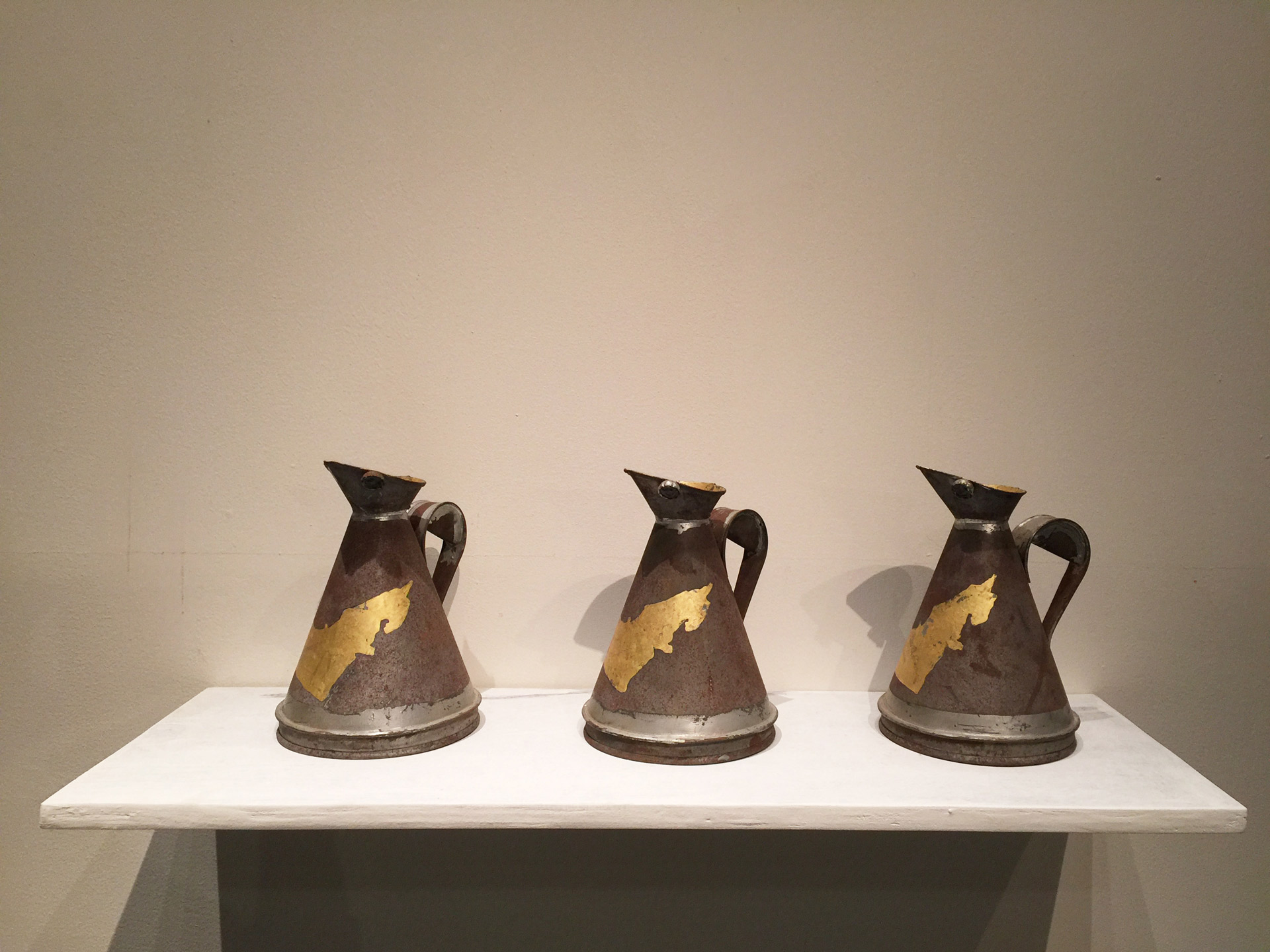 Sachin Bonde’s works over the last four years have been about the dynamics, maps and networks of movement of petrol and kerosene, and their relationship to realpolitik. In effect, he ends up mapping the world’s networks of pipelines that run underfoot, and that have been the cause of so many wars and invasions, since World War II, and especially foregrounded since 1991 to the present. The war for fuel, is also driven by fuel needed to prop up war. Without fuel, no tankers can be mobilised or fighter planes fly. Innovations in chemical petroleum, its technology and its supply, changed the dynamic of geographic interests. To many, petroleum—the pumped black liquid from under the surface of the earth, is viewed as a resource curse, spiralling countries into war, corruption, and environmental devastation.

A long history of such protest defines the art world of the 90s. In the Indian context, one may contend that oil politics has also galvanised its own art history. To take an example from Vivan Sundaram — a series recently shown in the Berlin Biennale, and in a particular work in the Jehangir Nicholson collection in Bombay, Sundaram has spoken of how this single work, signifies his own shift of consciousness about material as a carrier of meaning itself. Over his graphite drawing, a large blotch of oil clouds the glass of the frame, almost like an after thought. This single work is particular in this series. A large red splash of linseed oil obliterates the intensity of drawings behind. In his next series he will paint directly with engine oil. The literalisation of the medium, at the time of the Gulf War in 1990-91, takes his art outside of drawing by including the oil in zinc trays placed on stitched sheets of paper. This proposes the direction of his later installation work. It is a Janus-work, one of those transition works, in which a whole art history can be encapsulated, looking backward to the intensity of the graphite drawings and its references, and forward to his pioneering in India (along with artists like Nalini Malani) work with installations. Sundaram was protesting the first Iraq war — and was naming it for what it was — a war not of ideologies, but an aggression for raw materials. An artistic condemnation, that will remain long after that single war.

Many of Bonde’s works follow this meta-worldly outlook almost till abstraction, using maps, flags, and fighter planes, sweeping across Sudan, the South China Sea, the US, Brazil, Argentina’s Falkland Islands, Libya, Iraq, Iran, Russia, Japan and Saudi Arabia, siting various global wars in history, and in the present. An Uncle Sam’s hat is globalised, but the artist also takes this large world mapping, of pipelines, instability, and war, to another site—that of the ration shop. The ration shop not of a large city, but from the rural interiors of Maharashtra.

His exhibition equally revolves around a single news event, of a district collector. In Maharastra, the Additional District Collector of Malegaon, Yashwant Sonawane, was beaten and burned alive in 2011, for exposing an Indian oil-adulteration mafia. The theme of impurity, refers to the adulteration of kerosene, and therefore, to the scarcity of fuel, to crime and to corruption—to kerosene sold in the black, as an all too necessary supplement to the limits imposed by the ration shop. The helplessness of finding oneself on the side of the illegal, is the most crushing theme of this exhibition. It is a perspective we cannot find online, or in oil statistics, because it simply is not written that way. If oil politics is immense, and spans the world, the artist distills that whole sum, through the funnel of a ration shop. Into the act of pouring out kerosene, for monthly use, in villages, unlit by electricity. It is the kerosene of the oil lamp Bonde is referencing, and this gives the body of works a biting contemporaneity.

From the ration shop emanates related themes, from the perspective of poverty. If in the ration shop, oil is sold for 20 rupees a litre, in the black market, it would be sold at 80 rupees a litre. And yet, people are forced to buy more than the limited subsidised kerosene of the ration shop. Knowing it is adulterated. Knowing it is more expensive than the price in large, richer urban areas—one pays extra, needing more energy than what is provided for one month, and falling into what might be called a tax on poverty itself.

The implements of the ration shop that feature in Bonde’s work—the small-time artisanal crafting of a rough tin beaker and funnel—is the appreciation of one artist for another. They have fascinated the artist, who etches onto them directly, paints or pierces them with holes. Black gold, an often heard name for petroleum, is played with immensely within this exhibition. The metaphor is reduced into two colours. Black, the colour of the liquid, and gold, reflecting its value. This interchangeability, between black and gold, comes a full-circle, as the exhibition plays with corruption, with black-market fuels. The funnel turns black oil to gold (a metaphor of wealth), and that golden hue of money to black (a metaphor for the black-market economy, and illegality).

After the initial heroising of the collector, it was found that it was he, who had previously been demanding bribes from the oil-adulteration mafia.

Sachin Bonde was born at Darwha, in Yavtmal district in 1985. He completed his schooling at Darwha, starting art education at SPCM Nagpur, then moving to Mumbai for his BFA from 2007-2011 at the Sir JJ School of Art. He was awarded a teaching fellowship at Sir JJ School of Art from 2011-2012, and completed his MFA in Printmaking from 2013-2015 with a first class. Bonde’s father was a school teacher, now retired, and his mother is a house wife. The title of his debut solo exhibition, ‘Soil Oil’, is a literal translation for the name for kerosene in India. It is known as soil oil, in Hindi it's ‘mitti ka tel’ or  ‘?????? ?? ???’ and in Marathi ‘?????? ???’. Bonde recalls the strangeness of the expression, “My grandmother used this Marathi word when I was a child. I am from a farming family, so I only knew that the soil of our farm gives grains and vegetables to survive, at that time I didn't understand how kerosene could come from the soil.”

Contrasted with the impure, is the perception of purity, and the scale of murderous violence attached to attaining it. The white elephant, and the Marathi expressions and proverbs about elephants, the elephant’s ivory tusks, the perfume of the musk deer, the rhino’s horn, are rare and coveted objects whose value is in their scarcity. Their un-usefulness, makes the animals’ poaching, and death, all the more unnecessary, so that in abstraction, this may be for the artist an ultimate way to decipher the double-bind of wastefulness and value. While he may see the scarcity of oil, and the manipulation of its value, or its adulteration on one hand, on the other hand there is some kind of parallel being set up in this exhibition, of our historic commodification of desires. In proverbial fashion, Bonde uses animals—the camel, the deer, the elephant, the rhino, the rooster—within his work. What Bonde’s art works do is reveal through visual correspondences, the links between the elephant’s trunk and the nozzle of a petrol filling station. A king’s crown and an oil lamp.