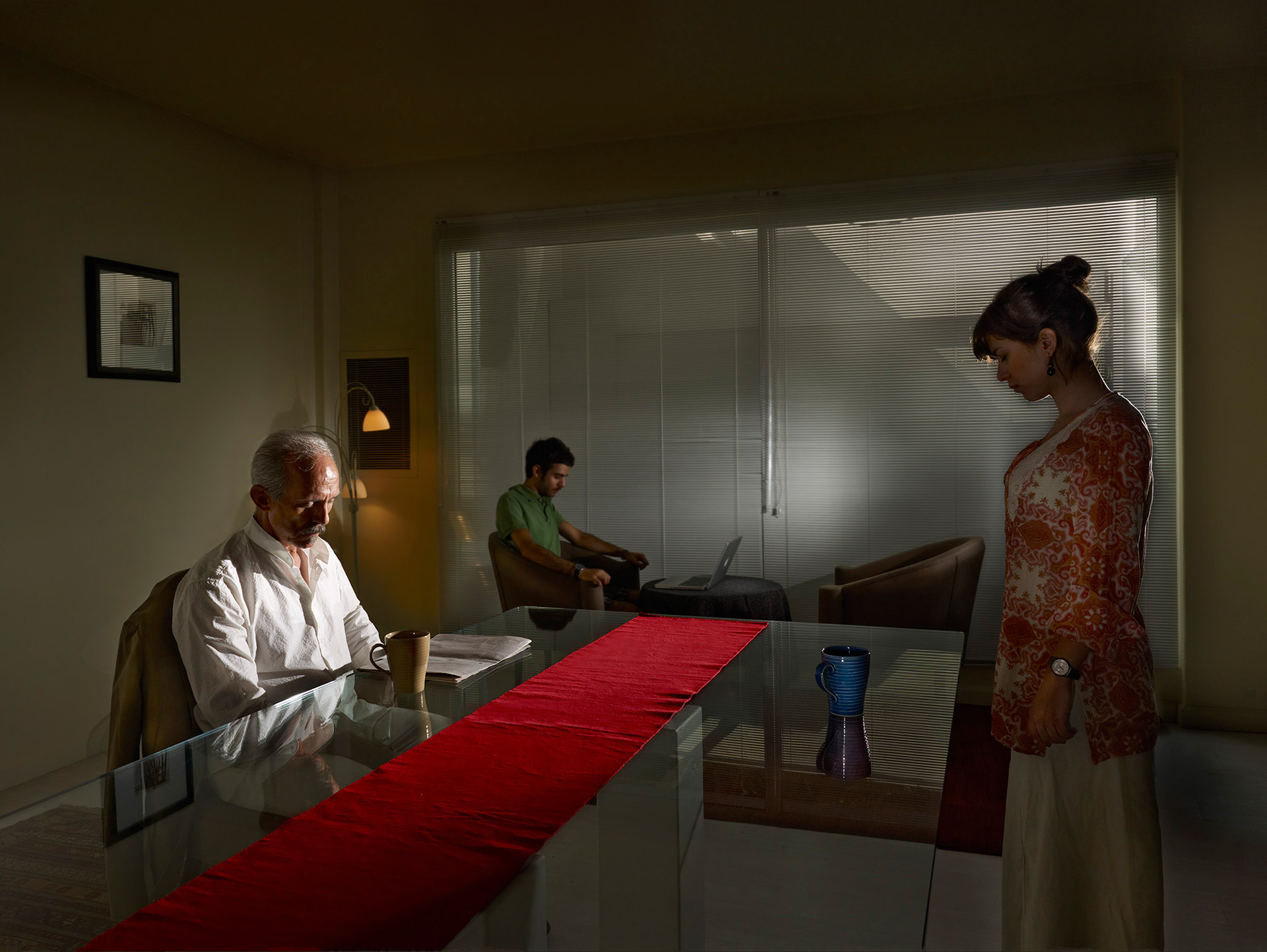 Among the Indian artists to watch out for at Gallery 1 x1 booth is certainly going to be Kolkata-based artist Chittrovanu Mazumdar, renowned for his eclectic use of material and medium. Continuously reinventing himself for the past three decades, Chittrovanu has always been ahead of his times and moved in a new direction with every show, simultaneously returning to the most primeval of human emotions – fear, hunger, ecstasy, desire. His art boldly blends elements of pop art with abstract swathes of colour, dealing with human paradox and ambiguity, of the seeping grey of daily life that escapes the purity of black and white. What appears to link the very visually and formally different phases of his work is the intensity of sensual immersion demanded by the artist of both himself and the viewer.

The relationships of lives with places may be considered of particular interest to Simrin Mehra – Agarwal whose wall-mounted installation comprising of 34 pieces in acrylic, stucco, wood and linenand titled Hierarchy has both a personal memory and the memory of places attached to it. Born in Kolkata, and a part of her family believed to have descended from the royal Jhargram dynasty, she has memories of a glorious past, full of maharajas and warriors, set in sumptuous palaces with a typically Oriental atmosphere.

She says: “My work traces the visual history of royalty within the local context of my native land as well as the broader context of the nation and the globe and puts forward the concerns of today’s royals by presenting a reflexive yet subjective view by means of visual comparisons, juxtapositions and overlaps. I study the journey of these forms from conception to deterioration from the medieval-ages through the colonial and post-colonial era.”

Similarly, a multilayered relationship between man and objects in the real world is the central focus of Bangalorean Biju Joze’s art. Joze subjects the original form of an object to several manipulations, playing with scale, function and context. The subsequent narrations are the result of a process of fragmentation and reconstruction, through concept and material. Biju’s digital workThe Gas Mask uses thumb-prints which are made by the meticulous and repetitive process of dabbing the thumb in an ink-pad, and creating impressions on a surface with varying pressures. Isolated, the prints appear as cell like forms, translucent and unsubstantial. Collectively, they ‘become’ the mass of the object. The act of making thumb-prints is a seminal, almost ritualistic process for the artist, evocative of socio-cultural memory, anthropological history, and personal identity. It follows his exploration of fragmentation and reconstruction, taking into consideration a certain degree of visual fantasy while also building bridges between micro and macrocosmic configurations.

Rameshwar Broota’s  photographic work What lies beneath opens up a discourse about the body and the built environment and is a tight close up of a human hand, showing every line, crease and wrinkle adorned with just a drop of water. “This could be earth, an animal skin or even a rock,” he says about the work which almost blurs the line between what is human and what is not.

Ravinder Reddy explores co-existing contemporary and traditional elements in his brightly coloured, sensually evocative, larger than life creations. Reddy’s images of women, couples and families explore the human body as a site of social, sexual, religious and cultural identity. His female heads are dispassionate and impersonal; however there is a kind of alertness in their expression. Their wide open eyes, bold, rhythmic silhouette, elaborate hair styles, lipstick smeared pursed lips, coiled hair with plastic bands and ribbons stage the relations between memory, history, mythology and contemporary reality, the ironies of modern societies.

Iran and India share a unique similarity in culture and past history. It is well known that India is home to the largest population of Parsees in the world who are originally from Iran. By introducing five Iranian artists - Khosrow Hassanzadeh, Pooya Aryanpour, Amirali Ghasemi, Nosratollah Moslemian and Alireza Fani - to the Indian audience at the India Art Fair from January 25, 2012 to January 29, 2012, Dubai-based art gallery, Gallery 1 x 1 hopes to rekindle interest in Iranian art.

Says Malini Gulrajani, Director, Gallery 1x1: “India is a great place for Iranian art to be promoted in, enjoyed and understood. India Art Fair would be the perfect platform and starting point for this introduction, hoping it will bring about many collaborations and future artistic projects between these two countries.”

Born in 1963, Tehran, Khosrow Hassanzadeh  studied painting at Mojtama-e-Honar University (1989-91) and Persian Literature at Azad University (1995-99) both in Tehran. He is not only a visual artist but also an actor who lives and works in Tehran and London. For the fair, his silk screen work in acrylic and gold leaf titled Ya Ali Madad depicts Ali, the first Imam in the Shia tradition. Ali was a strong and humble man, famous for helping the poor. People revered his sword as the Khyber.

Says Vida Hayderi , Iranian/Canadian Curator who has partnered Gallery 1 x 1 in bringing the Iranian artists: “In Iran, when people need help, they say ‘Ya Ali Madad’. The calligraphy inHassanzadeh’s paintings makes the letters dance and whirl like Sufi dervishes. The screen print is from an old photo of a pahalvan (wrestler) and holding hands on either side are a court intellectual, a Dervish, a General and Mullah. The pahlavan represents many aspects of Iranian culture that we are losing today.”

The other Iranian artist Alireza Fani, who studied graphic design at Chamran High School, is showing a series of archival prints in triptychs and polyptychs titled ?In search of the concept which depict staged photographs of a woman sometimes mysteriously carrying a single alphabet, sometimes embracing it, sometimes staring at it, and sometimes even molding herself as one with it. Says Fani: “This ‘single alphabet’ does not convey a specific message. It, in fact, is only a symbol of the many meanings that have encircled today’s woman.”

Fani reveals that his passion of taking black and white photographs began when he experimented with “an expired black and white film and an old Russian enlarger” in his own lab at home. “I can still remember the first photo that I printed there; a black and white image was slowly appearing on a paper under the red light and I was falling in love with that. That was an amazing experience.” He has also worked on several photography series since In Search of The Concept, including one titled Teheran 88 which has not been exhibited so far because of its socio-political content.

Iranian artist Amirali Ghasemi (1980, Iran) is a graphic designer, media artist and curator. He graduated in 2004 with a BA in graphic design from Central Tehran Azad University, with an emphasis on research into digital art history. Ghasemi is an interdisciplinary artist who uses various media from drawings to photography and from performance to video and interactive programs, his approach is mainly inspired by his surroundings, everyday life, found objects and ready-mades to randomized engines, and multimedia programs designed for more interaction with the public. Photography is a focal part of his practice but he doesn’t bind himself with it often and shifts further back and forth between non material performance world and medium scale installations.

?Ghasemi is showing an interactive video work titled Deep Inside which has an interactive interface with four colour stills. A projected large screen or on LCD monitor interactive program and a mouse will allow visitors to control the speed of the characters’ dreams and nightmares depending on how far the mouse pointer is from that certain character. Says Ghasemi: “Deep inside was created in the frame of exhibition Deep Depression in 2004 and it’s one of its kind and an example of early interactive works which was made inside Iran.” Ghasemi playfully brings the idea into a point, what causes you depression might be is the fact that you are thinking too much about yourself and paying less attention to your surroundings ... you can have day dreams instead .. that’s why when the viewer moves the mouse pointer away from the character, things move faster and at the certain distance you can hear/see the vibrant waves and sounds at their normal speed. In one word Deep Inside is a text to keep the balance between the inner soul and outer space.

The fourth Iranian Pooya Aryanpour is showing a diptych acrylic on canvas.

Nosratollah Moslemian says: “A major concern I have as a painter is how to express what is generally known as a “lived experience”. Going through a lengthy process, such a phenomenon always presents itself as a form in its entirety and in details. I have tried over these years to move beyond the limits of a portrait to get closer to an expressive form. While portraits take spectators to a traditional, historic past, they can be absolutely modern. The essence of these portraits expresses elegies and lyrics, destruction and creation, visibility and invisibility, and overlapping of several portraits and generations on a single portrait.  They are intertwined images of hidden and evident meanings that recount dreams and life.”