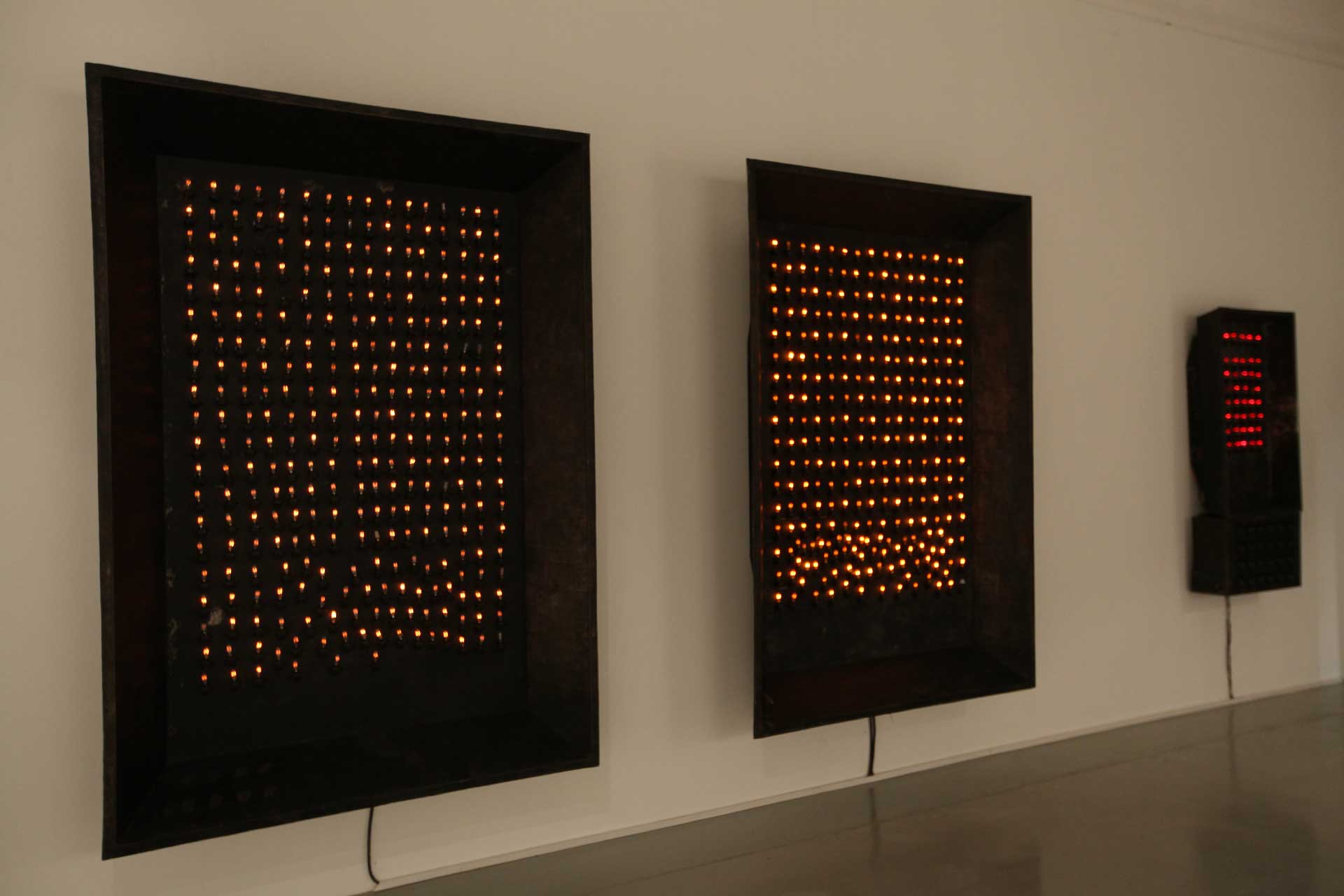 Chittrovanu Mazumdar’s body of works being exhibited at IAF are an extension of the works produced for the Kochi –Muziris Biennale 2016-2017.  Marking the passage, that is ephemeral, transient, a memory of the passing and passed by. These works possess a weight and solidity, in a sense they operate as a foil for fluidity. They are the remainder, the sediment, rock, the conglomerate forms of diverse landscapes that are unified by a force – the force of a single impression, a single image that solders them to one another.

Mithu Sen's practice stems from a strong drawing background that has extended into video, sculpture, installations, and sound works that further draw the viewer into her psyche. In addition to popular images that she turns into puns, many of the recurring motifs in her dreamlike works, such as teeth, birds, and spinal columns, have deeper psychoanalytic readings that tie into our subconscious thoughts about sexuality.  These diverse materials are used as metaphors in her works, where the simple game of life in performance becomes a poetic evocation of human existence. The various recurring motifs in her works have a psychoanalytic reading to them that mobilize an exploration of the subconscious. The ease with which Sen negotiates the public and private realm, enables her works of deep-rooted Indian context to gain a universal significance. Her works satirizes various taboos associated with human existence and try to invert them by adding a dark humor to them.

Sachin Bonde extends oil politics into realms of personal space and conceptual questions of materiality.  He mimics industrial materials and techniques to create an assemblage of prints, sculptures and installations to critique the relationship that oil metals and natural resources have to common quotidian lives such as of his own.  Sachin Bonde draws comparisons between the murder of a rhinoceros for its horn and near extinction of the Elephant in the wild for its ivory to the thousands of deaths that arise out of Western campaigns that target civilian populations in the search of terrorists.  The Death of a Penguin is a symbolic presentation of an inert political system about the economical change in India after demonetization. Here tittle-tattling of people from family of politics is same as like inert penguins.

Judy Blum Reddy is seen in a exuberant hysteria, drawings from her past, etchings, watercolours and photographs are scanned etched and printed and then drawn and gouache-d upon again to create layers of time.  Delhi Phone Book is a set of lists where she colours Delhi's bureaucratic committees, boards for cow breeding, sports associations, public art sub-committees, road laying organisation and the committee for co-operation of these various committees.  As she copied the telephone directory of the Indian Habitat Centre, she criticised the inefficiency of the systems of power that actually build and connect Delhi more than the Lutyens plan for an imperial capital.  I Am Afraid of My World, a fear well thought out, not in hysteria, but based on the fragility of our democratic institutions. She was born to parents who had survived the holocaust and came to New York, post which she was born into a life where the idea of identity was never a potential attraction or something that would bind her emotionally.

What you see is what it may not be. The objects on the shelves represent alphabets and hence a text in totality. First alphabet of each object: for example: a for Apple, b for bag, c for cylinder and so on. Poonam Jain makes a bookshelf of clay sculptures that are a script coded to read as a poem.

While today information is accessible at the click of a button, these works demand for a commitment of time and effort in order to impart information.

How can/one stop on the street and ask:  This is my destiny?

A sketch pad of mundaneness in the era of lifestyle war.

A Rumour has been around. A mundane Rumour. The masters are drawing a map for you.

For us. This can vanish with blink of an eye. Alert. (Property) rates rise. Mundane remains mundane and will remain so. Even in changed avatars. It does not matter. Not to you. Not to me. Not to the Neighbours. Except when we(can) talk about high prices of (vegetables) at still existing local markets. Or of the end of the season sale at the Mall across the street. Players play. They play. We play.