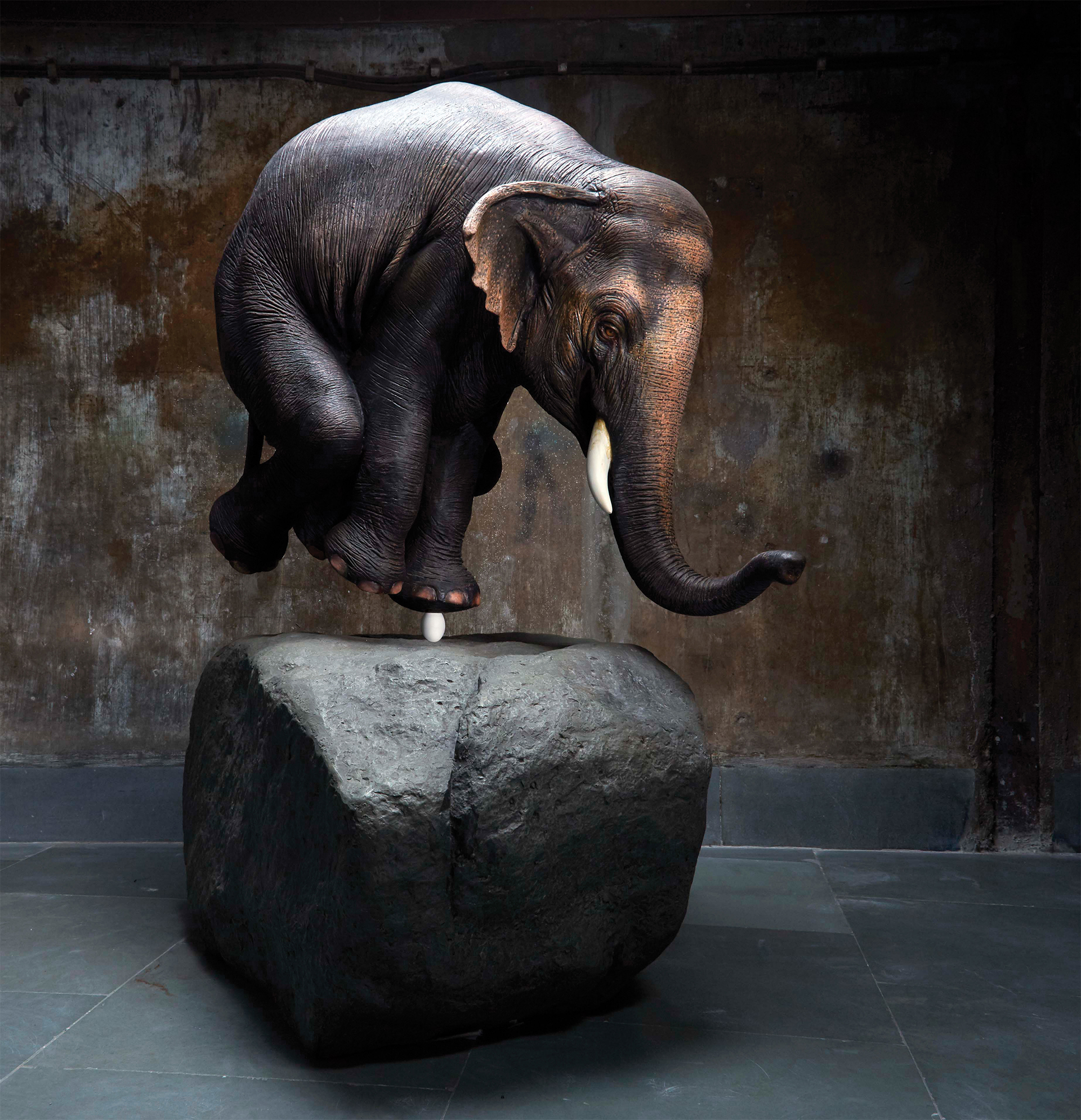 Gawde, stages incidents that ply the present continuous unfolding into time a narrative affixed by an underlying conclusion. The construct is often heady for the subject in question or the lead, as there is danger lurking, coupled with sexual tension that escalates the resulting intoxication, until it's out of breath - the vocal sacs of the male frog for instance- to speed it up to this forgone conclusion. The work hints at, it beginning to loose itself in an inebriated state, blinded by narcissistic desires, one among the dark triad. That may seem severely Freudian, dealing with the 'ego and the id', is also a result of seeking extreme moral principle with religious fervour that has to survive all base desires, spilling out a kind of sensational even scandalous content, religious or mythological fiction may be beset by and yet surviving our daily prejudice. Fey as narcissistic desire is to the corruption of the self, so is heterogeneous desire, Gawde construes, with the mind of an ascetic almost. One may draw allusion to, Duchamp’s 'The Bride and her Bachelors even' what some critics consider, to be an exploration of male and female desire as they complicate each other. Dangerous love is espoused in a nail punctured, porcupine like hairy heart, laid in a stills sequence, representing a valentine lookalike heart balloon cardiogram. There is an unmistakable reference to the sacred heart pierced by a ring of thorns as he hunts for a ‘true love’ iconography for a much maimed and pained heart that says, "I may have a broken heart but it still beats for you".

'ID' and 'OD' as besotted in the title, are technical engineering terms, reflecting a clear fascination and fondness for the accurate mapping of things. He dwells on the girth of bulbs, to the symbol of the diameter '∅' as constituting the largest plane in a sphere that cuts through its very core. This incisiveness attributed is the outlook he'd like to bear and unveil he reckons; in the recounting of the tales he tells. An adherence and a desired endoscopic viewing of the elements as such besiege the works. Beginning with water, the cradle of all civilization, to the carefully considered motif of the Indian elephant, the symbols recur in various acts and instances. The search for water- the coinage of migration perhaps- is a mirage that envelops them, raking in the ideas of land, resources and belonging. These are also spouted by an academic exultation in the properties of scale, weight and proportion resorted to make prevail identity of say the elephant, as he muses upon the national icons of India and China in their mythological incarnations, examining the two as it were: the fictitious dragon vis a vis the elephant as an anthropological creature.

There is an insistence on the predominance of formal visual orientation or focus that may blind a viewer, making the viewer less available to the subtle movements he then laces in, outside the periphery of such a focus that he then predicts us to miss. The surrealism resorted to is also incumbent in his choice of pairing renderings that are dissimilar -collating the 'readymade' with the 'stylized' and realistically finished objects, reminiscent of a modernist sensibility.

Each work begin as short tales that reproach by its moral findings, the pitfalls one maybe snared by and possible crevices of light that may serve as hope in a spiritual quest that questions contemporary life in adult fables to arrive at explaining or explanations.

He relies on a certain neutrality and sound judgment as is reposed in a scientific experiment and related apparatus; poised such that it appeals to its own plausibility, and seeks piecemeal, this proportion of the real, only to then turn it around like a shaman and slip the unbelievable into it. The exercise serves to eke out a theory or phenomena that gratifies early psychoanalytical ideas of transference or on the other hand, the idea that the total energy of the universe and its life remains constant bringing home the artist's personal beliefs in Hindu and Buddhist philosophy and the idea of rebirth.

Distant horizons of the kind collide with the viewer's gaze, the fidelity of which might find itself bracing an upside down proposition, when the very eye, the purveyor of the gaze, finds itself plucked out, socket free, in another void of a bulb in which it might do orbit time. But really, it's a kind of cross messaging tactic where the gaze is sucked in to the source of light, treacherous desire on the light's part, a Machiavellian foreboding perhaps. Can a bulb see or is it just blind anyway?

Or maybe the incidence of light works merely as a switch that turns on vision. The clouding or aberration of vision however, are likely to be influenced by more than just light.  A periodical fogging may happen, repeated over and over it is the obfuscation of principle. Lenses true to form and size, true also to the knowledge of the average wearers height are employed; for it is placed thus to invite such an experience. Glasses are worn as optical aids, mostly by those seeking to realign transgressions in seeing. Now this occurrence just gets worse each time, slowly but surely. There is another certainty on the other end in the offing - clarity and trueness and its guile, for those unhappy with the little they see. Clarity may not clarify, objectionably perhaps a case of: “the more I read the less I know”.

In the otherwise grey-less, postcard pretty artefact titled, ‘After Vincent’ the shading is compensated for by the shade around the edges of two planes, as they cross each other and reveal their intentions so. Spiral stairways of lights, shimmer through the distance; paying obeisance to the tumultuous internal landscape that Van Gogh left us agog with. If seeing was believing, then what did Van Gogh see, and what does Gawde see within that vision? Is it an ode or a reflection? If not in convalescence as the former did, then the powder in the eye, the twinkle in the distance - is it trick or treat?

The curtains lift up upon turning around and the scene changes to the inside of a watch tower, like a no place grand sire, with and without time. The mechanism, stagecraft and proportions are part of the persuasion. Waning and waxing the many moons that attempt to swoon us over like a world clock, clocks within clocks, where meridians might wait or night might become day too. Is it possible then, to measure time thus with the changing circumference of the moon?