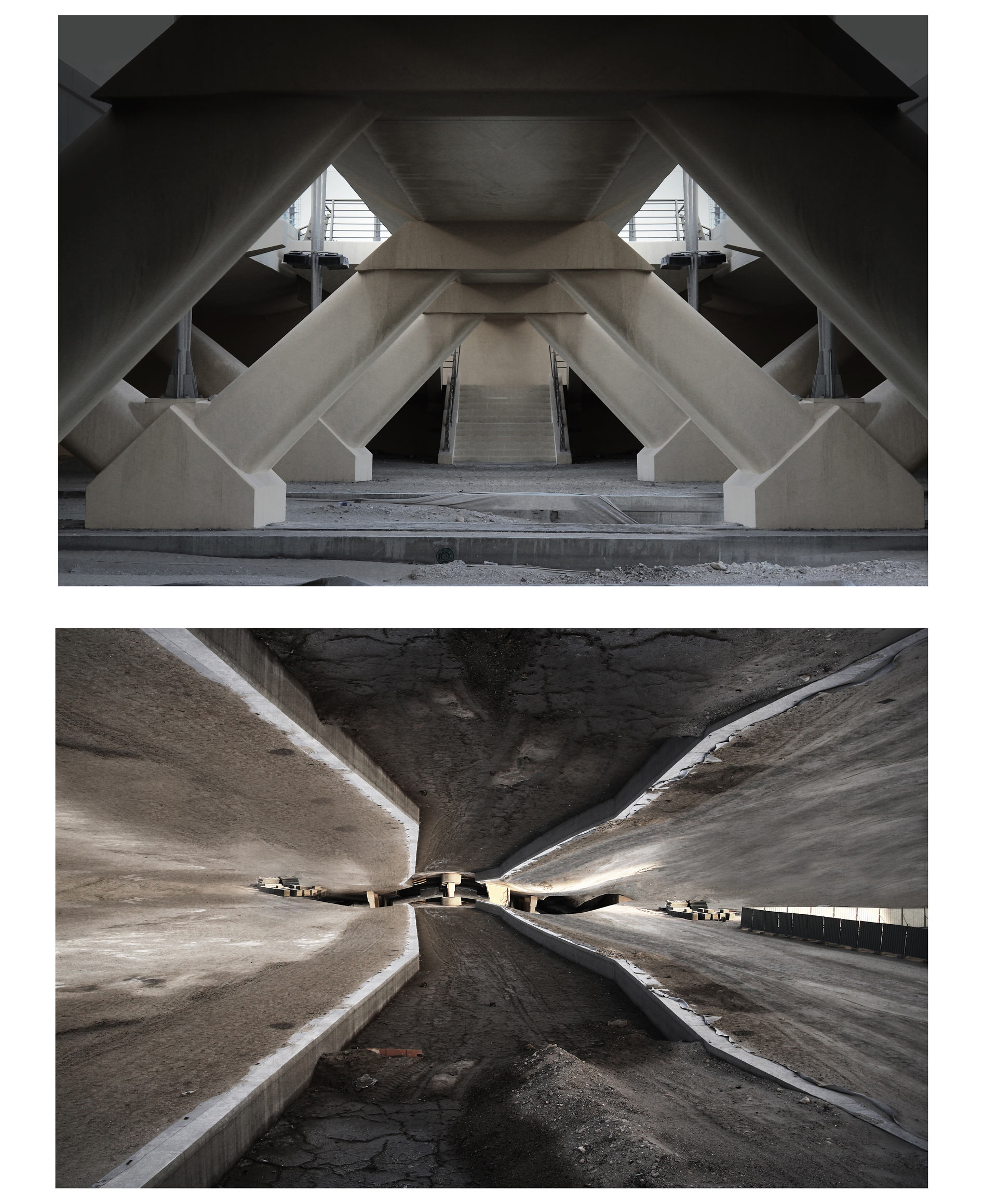 Barely a beat, the swallowed prefix that patterns these three words is a current of mercurial negation. It hovers present and absent: ‘real’ is not equivalent to fact, and ‘unreal’ is not fiction. Unlike the comfortable equilibrium of true/false, absent the prefix, these words do not render tidy counterparts. Embedded within unreal is the absolute possibility of the real; it is the breathless speculation of off-plan real estate or the towering phantoms of childhood bedtime stories.

Developed over the last decade, Alaa Edris’ multimedia experiments in film, performance, photography and digital installation distort figure and environment. Manipulations of urban and folkloric scenes accumulate into ritualistic performances of past and future, enacting provisional mappings of the systems that shape her social context.

The sensory uncertainty of the unreal, the unseen, and the untouched establishes these works as out-of-reach landscapes, figures of the not-now. Existence is not denied, but a degree of scepticism is cautioned in the realm of djinn, myth and architectural masterplanning. The negation is a process of coming apart – as in the ten-years-delayed projection ‘The Face’ (2009/2019), doubled and rupturing features sliding and contorting a visage settled restlessly on form.

To be unseen is not to be invisible; projection and reflection are ghostly apparitions. Unseeing is the complicity of refusal. Social progress denied in arduous, circuitous repetition. Collective blindness is served up here as hard to swallow truths, compulsive ‘ignorance’ and ‘wants’ (‘The Consumer, The Consumed’, 2014) and the tortuous, grinding, repetitive structures that preserve patriarchy (‘Devourless’, 2008).

To be untouched is not to be intangible. It is a slippage of tense, where meaning is discontinuous. Not pristine, repose as much as sensory qualifier. A civic mausoleum of ambition and status. The buildings found in ‘State’ (2016) chronicle developing urban landscapes, their enduring physical presence distorted through garrulous imaginative adornment. Monuments at sea amid ever-shifting architectural statements, an archaeology of nation-building.

Edris cusps familiarity. The everyday is made strange, yet remains moored to the present and the past, troubled by nostalgia. It is recognisable like a landscape disfigured after some possible, future catastrophe. Through distinctive, stylised vernaculars we stray into uncanny realms: dystopian vistas of bleeding red skies and listing lampposts; a warping of faces, her own made peculiar as if through magic or sci-fi prosthesis; a bricolage history told in the elongated shadows and anxious contrast of expressionist cinema. Playing the documentarian, she harvests details from archives. The director dreaming, she assumes strange new forms. As urban historian, she locates forgotten moments of municipal pride, then builds dioramas like an architect rendering outlandish futures in miniature.

Past, present and future jostle: folklore unspooling through childhood memories; a concatenation of black and white documentary footage; megaprojects, in a state of disorder and ambition, telegraph restless striving.

Here un- is the adjunct that maps process and reversal. Not the liminal space between before and after, but shifting fields of undoing and redoing. The everyday is made unfamiliar to expose what is unseen, to force a re-seeing of the unacknowledged. Digital manipulations retouch the forgotten past as a framework for the future. These are processes of manifestation, exposing systems and signifiers of power.